In film production, a C-Stand (or Century Stand) is primarily used to position light modifiers, such as silks, nets, or flags, in front of light sources. The stand is constructed of metal and consists of a collapsible base, two riser columns, and a baby pin on top. In addition, a C-stand includes a gobo head and a gobo arm, which provide the ability to articulate a light modifier without moving the stand itself. The legs are staggered in height allowing them to fit in, around, and under furniture, props, and other lighting stands. A Rocky Mountain or sliding leg is available on some stands, which permits one leg to be raised so it can rest on an elevated surface, such as a stair step, counter, rock, or other object. The standard 40" double raised stand can reach approximately 13'8" and weighs about eleven pounds. The term C-stand is primarily thought to come from the early history of lighting equipment where a popular sized sun reflector was 100 inches square or "century". Today the term C-stand is a popular name for these grip stands made by Matthews Studio and American Grip. 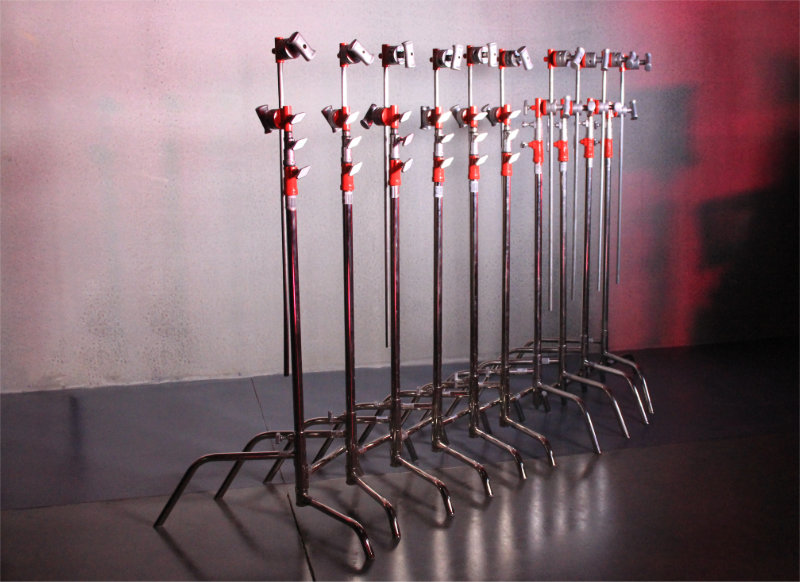 C-Stands are made to be universal!

All 2-1/2" grip heads and gobo heads are designed to receive 5/8", 1/2", and 3/8" round accessories. They will also accept an object of irregular shape, if not in the holes, then between the flat plates as marked. The head consists of a knob or knuckle and an outside or inside plate that butts up to a flat portion of the head. The plates keep their hole alignment by an alignment pin between the outer and inner plates, which are attached to one plate while the other plate has a hole for free floating. 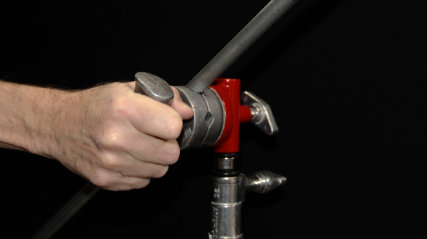 The C-Stand should always be used with the knuckle "on the right". The reason the knuckles are on the right is that any time a flag or gobo is put in the head, gravity will pull it downwards. The knuckle or knob is tightened clockwise. The weight of the flag will cause the head to bite by pulling down (clockwise), causing a friction action and locking it in place. The stand must be placed with the knuckles on the right and with one leg placed in a forward position. This will help support the weight of an object such as a flag and keep it from falling over forward. In order to prevent the stand from toppling, a sand bag or shot bag is usually placed on the rearmost leg to act as a counterbalance.

C-Stands are more than just stands!

Another common use for C-stands is to position smaller light fixtures. A typical use would be to offset a back light from the stand column, so that the stand itself can be placed out of shot, while the back light hovers somewhere above the top edge of frame. In recent years, C-stands have found a new use, supporting the brackets used for balancing Steadicam (and similar) camera sleds. Due to the off-center weight distribution in this practice, it is necessary to use sand bags to add weight to a C-stand leg. 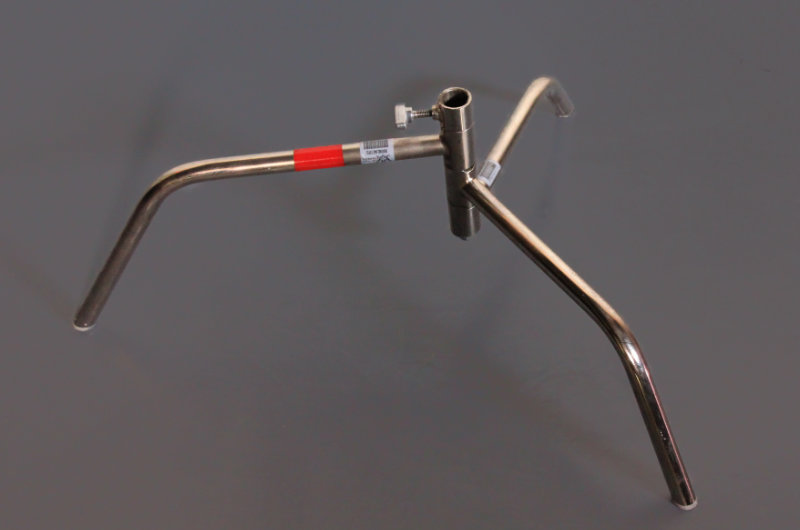 There are minor variations in models. A C-Stand with a removable base is called a C-Stand with a turtle base. The opening at the top of the turtle base accepts the base of C-Stand upright or a junior pin. Turtle bases are great for setting up a light very low to the ground. A C-stand with an upper most leg which is moveable on the vertical axis is called a Stair Leg C-stand as the unit can be placed on a stairway. It is more commonly referred to as a Rocky Mountain leg or Rocky Mountain C-Stand. 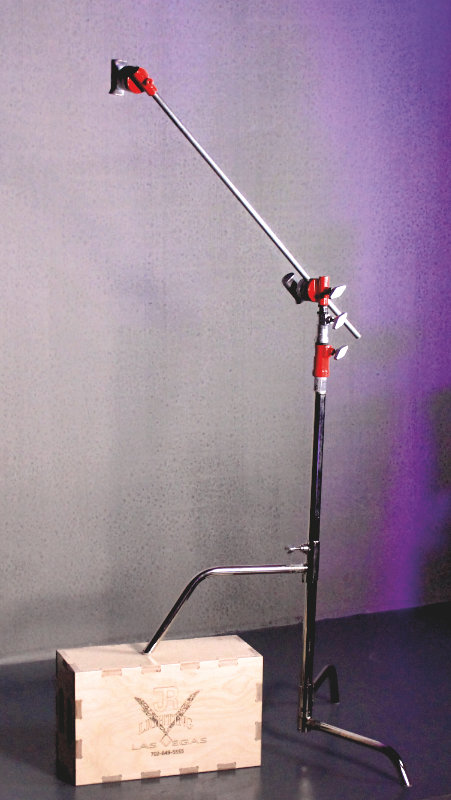 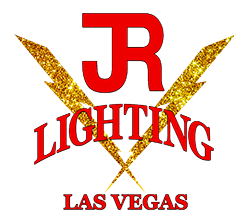 After hours assistance: Having a lighting or grip emergency? We are available 24/7! You will be directed to our After Hours Assistant through the main office recording.

Our Mission: We pride ourselves on fanatical equipment maintenance, extreme service and working within your budget.